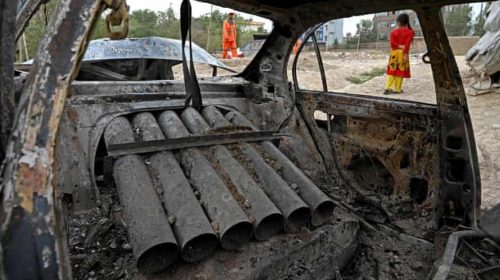 rockets fired at Kabul airport as US approaches withdrawal deadline

Rockets were launched toward Kabul international airport on Monday morning as the U.S. withdrawal from Afghanistan entered what President Biden has said will be its second-to-last day.

Biden had been briefed “on the rocket attack” and “was informed that operations continue uninterrupted at HKIA, and has reconfirmed his order that commanders redouble their efforts to prioritize doing whatever is necessary to protect our forces on the ground.” Russia has called on the US to release Afghan central bank reserves that Washington blocked after the Taliban’s takeover of Kabul earlier this month.

“If our western colleagues are actually worried about the fate of the Afghan people, then we must not create additional problems for them by freezing gold and foreign exchange reserves,” said the Kremlin’s envoy to Afghanistan Zamir Kabulov, AFP reports.

The attack targeted the airport, which has been the scene of chaos for two weeks since a mass exodus began from Afghanistan that followed the Taliban seizing control of the country earlier this month.

The U.S. military has been conducting airlifts of military personnel, citizens and Afghan civilians and has so far evacuated more than 100,000. Biden has stuck to the Aug. 31 withdrawal deadline.